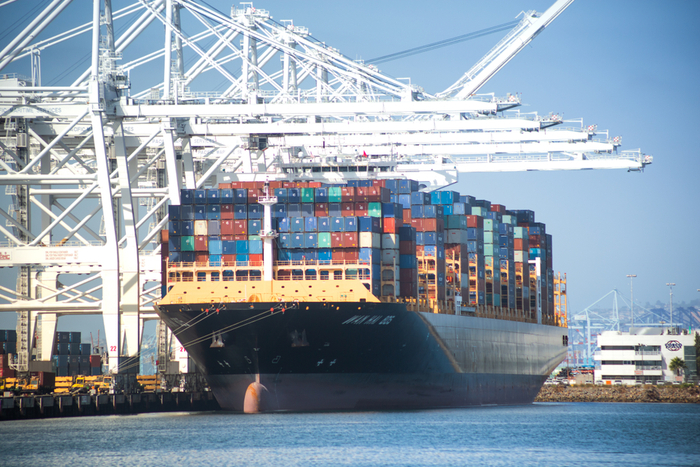 Terminal operators in the ports of Los Angeles, Long Beach, and Oakland Tuesday will begin delaying the start of their night shift by one hour so cargo-handling equipment can be sanitized as part of the effort to stem the spread of the coronavirus disease 2019 (COVID-19).
The work shifts at West Coast ports are normally 8 a.m. to 5 p.m. and 6 p.m. to 3 a.m. Under the new coronavirus sanitation measures, the night shift will be 7 p.m. to 4 a.m.
“Despite COVID-19 disruption across many industries, California ports are fully operational and open for business, and we do not anticipate that the slight modification to operating hours to disinfect equipment will impact cargo availability,” said Michele Grubbs, vice president of the Pacific Merchant Shipping Association, which represents carriers and terminal operators in legislative matters.
Terminal operators and the Harbor Trucking Association (HTA) indicated the slight revision in the night shift hours should not result in operational disruptions at the ports. All 12 of the container terminals in Los Angeles and Long Beach operate night shifts. Oakland International Container Terminal and TraPac in Oakland regularly run night gates, according to the port.
The new hours also will apply to the Northwest Seaport Alliance of Seattle and Tacoma (NWSA) if terminals should schedule night shifts, but extended gates at the NWSA normally occur on an as-needed basis, such as during the peak shipping season. Nevertheless, an NWSA spokesperson said Tuesday all terminal equipment is being cleaned between shifts.
James McKenna, president of the Pacific Maritime Association (PMA), the employers’ organization that negotiates the coastwide contract with the International Longshore and Warehouse Union (ILWU), told JOC.com Tuesday the decision to alter night shift hours was reached in cooperation with the ILWU. The new hours will remain in effect for 30 days, for now.
Regulatory authorities have exempted ports, warehouses, and other logistics operations from “shelter-in-place”restrictions, allowing these links in the supply chain to continue to operate.

Port container terminals have dozens, even hundreds, of pieces of cargo-handling equipment, including ship-to-shore cranes, rubber-tire gantry cranes, and yard trucks that lift or shuttle containers throughout the facility. Under the new protocol, that equipment must be sanitized between the day and night shifts, and between the night shift and the next day shift beginning at 8 a.m.
Weston LaBar, CEO of the HTA, which has members in Southern California and Oakland, said the sanitization actions are understandable and necessary, both for the longshore workers working at the terminals and the thousands of truckers who call daily at the facilities.
LaBar told JOC.com Tuesday ports should also sanitize the points of interaction between the terminals and the truckers, such as gates and the trouble ticket windows that handle documentation issues. Ed DeNike, president of SSA Containers, which operates terminals in Seattle, Oakland, and Long Beach, said all SSA terminals are cleaning those areas. “We do it two to three times a day,” DeNike said.
DeNike noted that terminal operators are working with the individual ILWU locals to ensure the specific requests of longshore workers are met. In Southern California and the NWSA, for example, the cleaning process involves spraying the cab of the cargo-handling equipment and closing the door of the equipment to ensure it is fully sanitized. In Oakland, the ILWU local wants the cabs to be physically wiped down, which is being done, DeNike said.
Contact Bill Mongelluzzo at bill.mongelluzzo@ihsmarkit.com and follow him on Twitter: @billmongelluzzo.
https://www.joc.com/port-news/us-ports/west-coast-ports-adjust-night-shift-hours-equipment-sanitizing_20200324.html?