March 6, 1987 (the salvage of the Herald of Free Enterprise) 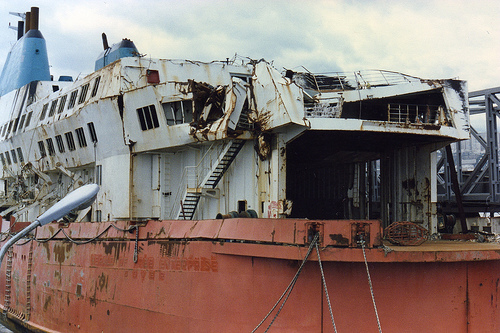 Photo gallery of the salvage at uitkerke.be
The 132 meter long ro-ro ferry Herald of Free Enterprise departed from Zeebrugge bound for Dover on March 6, 1987.   The ferry loaded with 459 passengers, 80 crew and 131 vehicles suddenly capsized and sank under five minutes later.  The ferry had lost stability and rolled over to port in shallow water.   The water had rushed in as the watertight door in the bow was open allowing water to rush down the length of the vessel.  The water quickly flooded the vessel disabling the electrical systems.  Passengers and crew trapped inside were thrown into darkness in frigid water.
A nearby dredger saw the lights of the ferry disappeared and contacted the authorities.  The Belgian Navy was nearby and soon rescue helicopters were on the scene.   While many were rescued, many perished due to hypothermia before they could be rescued.  When search and rescue efforts ended, there were 193 people who perished on board the vessel.
The Herald of Free Enterprise was salvaged in April 1987 and taken to Flushing.   The vessel was sold for scrap and towed to Taiwan in 1988.
The cause of the sinking was investigated and revealed several causes that lead to the sinking.