At Europe’s busiest port, in Rotterdam, Reverend Dennis Woodward has adapted his routine.
Before the coronavirus pandemic struck, Woodward was one of 20 chaplains and volunteers from maritime welfare groups who boarded ships at this port to offer help to the 500,000 seafarers who pass through here every year. Now, he is the only one left.


As he travels from ship to ship, he now dons disposable gloves, keeps two metres from the crew and stops at the top of the gangway, rather than enter vessels. But he doesn’t wear a face mask: he feels it is important to show his face.
“One seafarer almost cried when I told him I was the last chaplain still visiting ships in the port. He was a seafarer from the Philippines and, like myself, had two small children. He was misty-eyed. He was checking in daily with his family, but coronavirus is also in the Philippines and they are thousands of miles away.” 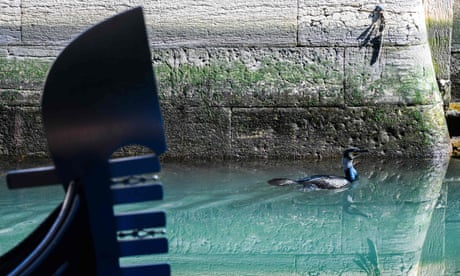 'Nature is taking back Venice': wildlife returns to tourist-free city

Read more
The port is vital to the global supply chain of food, medicine and other goods, and many of the seafarers who work the container ships have not been ashore in months – and may not be able to land for some time yet.
“They are tough guys and they tend not to show it, but you can see it in their eyes,” says Woodward. “They are anxious. Their families are often thousands of miles away, in countries that are in lockdown. At this time, what they can’t offer their families is protection. That is what they are worried about. We are all human and this is a big unknown.”
Anxiety is growing among crews. Some have reported non-payment of wages, or contracts being extended without consent. Other seafarers have been stranded in foreign ports without wages or flights home.

Photograph: Dennis Woodward
Shipping organisations and seafarers unions are urging governments to make travel easier for ships’ crews, amid reports of thousands of seamen becoming stranded on their vessels after their contracts have ended, due to coronavirus restrictions and a lack of international flights.
In normal circumstances, Woodward, a dual British-Dutch national who was ordained in Cambridge and lives with his wife and two children in Schiedam, in the Netherlands, would offer seafarers a trip ashore to the supermarket to get supplies, a much-needed sim card to stay in touch with family, or pastoral support.
“Now, I try to have a brief conversation – about how grateful we are for their work keeping global supply chains open. I say, I’m here to say thank you and unfortunately, then I will have to leave you. I’m unable to have the in-depth pastoral conversations we usually have,” he says.
In recent weeks, Woodward has visited seafarers from the Philippines, India, Russia, the Ukraine and Romania.
“Most people don’t realise it but these seafarers are essential workers,” he says. “Our heroes are the nurses and doctors, in the NHS and elsewhere – but without seafarers, how would the supermarkets work? We know that medical supplies and groceries are coming out of the port. If all that stopped … it is unimaginable.”
This week the UK became the first country to recognise seafarers as “key workers” , following pressure from the international chamber of shipping, the UK chamber of shipping, transport unions and maritime charities.
Earlier this month, Woodward received a WhatsApp message from a seaman from Mindanao, in the Philippines, who was desperate to see his wife and daughter, now in lockdown. The man’s contract, on a vessel sailing in the Mediterranean, had ended in December and was extended for a month – but after Covid-19 struck, requests from the ship to countries including Turkey and Israel to allow it to dock were turned down.

Advertisement
He has now been at sea for a year.

Coronavirus: the week explained - sign up for our email newsletter

Read more
“This has become a real issue, with many seafarers finding themselves trapped onboard their vessel, not allowed to disembark by their companies, the port state or the flag state,” Woodward says. “This needs urgent intervention and a sustainable solution, before it’s too late.”
Woodward will continue his work as long as it’s safe, he says. On Monday he visited five ships and distributed bags to the men, containing woolly hats, bibles and hand-written cards from children thanking the seafarers for their work. These gifts have touched many, he said, including a Filipino father of two he met last week.
“He was blown away,” Woodward recalls. “He just said, ‘Wow’. A simple thank you from a child.”
on April 02, 2020