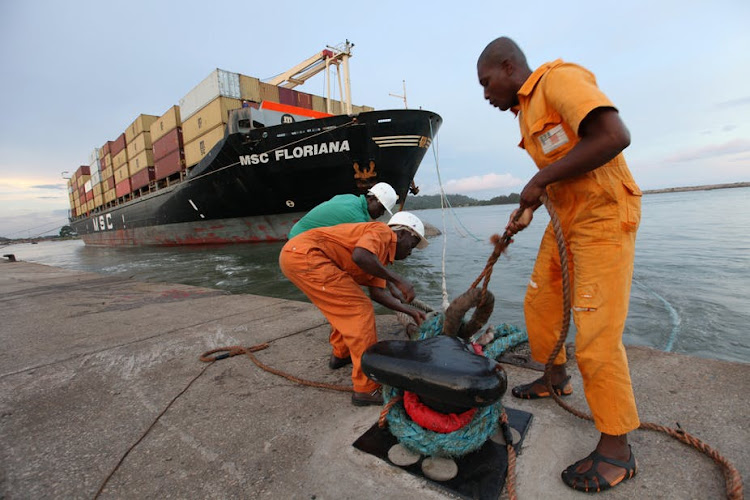 By MBARUKU MOHAMMED
In Summary
• High unemployment and impunity of labour supply firms see seafarers taking as little as Sh200 per 18-hour shift out of desperation
• Workers doing similar jobs at the port of neighbouring Tanzania are paid Sh50,000-80,000

It is said that grown-up men rarely cry in public, and when it happens they must be deeply troubled.
Seafarers with their reputation for stout and hardy demeanour are an even more unlikely source of tears. Yet Thomas Kambi couldn't help but broke down in front of strangers young enough to be his children.
The middle-aged man was narrating to journalists his experience at the hands of a marine service employer when emotions got the better of him. He sobbed and tears flowed freely.
“I am very bitter after what they did to me. One day, the boss just walked up tom me and said I no longer have a job,” he emotionally told the reporters.
“They used to pay me Sh160 per (eight-hour) shift, but after piling pressure on them to increase the rate, they began paying us 250. This was the reason I was targeted.”
He was speaking on the sidelines of a stakeholder’s forum, which was held in Mombasa recently to address the subject of labour and human rights conditions facing maritime workers.
The event had been organised by the Forum for International Cooperation (FIC), a Danish development organisation implementing decent work programmes for economic growth.

President took a swipe at privatization opponents saying he has no room for ‘ujinga'.
NEWS
7 MONTHS AGO
UNTOLD STORIES
In its own way, Kambi’s emotional breakdown captured the often unreported ordeals of many casual labour seafarers.
There are two categories of seafarers. One comprises those who work on seagoing vessels, while the other includes persons working on ships that berth at the port of Mombasa.
According to the Seafarers Union of Kenya, the workforce of seafaring labourers comprises about 2,000 people. These are engaged in various casual jobs at the port on an almost daily basis.
They are employed by private ship contractors on behalf of ship agents who are the local representatives of foreign-owned ships. Their work includes cleaning, chipping and painting, lashing and unlashing of containers, security services, mechanical jobs and tallying of offloaded goods among others.
Basically, they work hand in glove with dock workers employed by the Kenya Ports Authority and, therefore, have a critical role in the facilitation of trade and efficiency at the port.
However, this lot cuts the figure of a marginalised labour force as far as decent work is concerned, particularly the ones working on docked rather than ocean-going ships.
Stories of paltry wages contrary to minimum labour standards, exposure to precarious safety and health conditions, ostracisation for joining labour organisations and exposure to accidents abound in their lives.
LIVING INSIDE THE PORT
Due to the informal nature of their labour engagements, the port-based seafarers miss out on the conditions and rewards enjoyed by dockworkers and the ocean-going seafarers.
They earn as little as Sh200 per 18-hour shifts working on docked vessels at the Mombasa port, the forum heard. This reportedly causes many to literally live inside the port for weeks to escape spending on transport and the Sh100 daily gate card fees.
That sort of expenditure is simply too much for them.
SUK chairperson Daudi Haji said similar jobs at the port of neighbouring Tanzania are paid Sh50,000-80,000. He wondered how labour supply companies at the Mombasa port are left to operate with impunity, well below the minimum rates.
“The Kenya Maritime Authority needs to take charge as a regulator. Why do ship agents who represent foreign owners seem to have more powers when it comes to the welfare of seafarers,” Haji said at the forum.
“When the Tanzanian maritime regulator makes a decision, the ship owners and agents have to comply, whether they like it or not. But what is happening here is a shame.”

Chengo claims MPs opposed to plan are serving vested interests
COUNTIES
9 MONTHS AGO
FATAL ACCIDENTS
The prevailing exploitation has been attributed to various circumstances. For instance, high unemployment has been blamed for high desperation levels among seafarers, causing them to take up the informal jobs, despite the risks involved.
“You will find that when workers are dismissed for joining labour unions to fight for their rights, those who are not employed rush to fill the vacancies,” FIC regional manager Casper Pedo said.
“That is how chaotic things are.”
The deplorable working conditions have strongly been linked to accidents, sometimes with fatal consequences, because of the heavy machinery and goods involved.
Another seafarer narrated how his colleague died at the port recently. “He was working in a vessel when a fertiliser bulk fell from a hook and landed on his truck. He died on the spot,” Hillary Igwen said.
He also alluded to overworking, which is reportedly rife. “Sometimes a shift that requires a team of eight people is allocated to only three people,” he said.
While acknowledging the challenges in the sector, the KMA called for coordination and unity among stakeholders in addressing them.
“Let’s work as a team, including the government, unions, the FIC and others, and I believe there is something we can achieve,” KMA board chairperson Geoffrey Mwango said.
On their part, ship contractors, who seafarers pointed accusing fingers at, shifted the blame to ship agents, whom they claimed are paying them low tariffs and not facilitating decent work conditions.
“We are also blaming the shipping agents because they are the principals who pay us low rates then we pay the seafarer low wages in turn,” said Richard Jefwa, the chairperson of Kenya Ships Contractors Association.

- For decades, Kenyan seafarers have been forced to work under extreme conditions with poor terms of service and undeserving pay because of a lack of ...
BUSINESS
5 MONTHS AGO