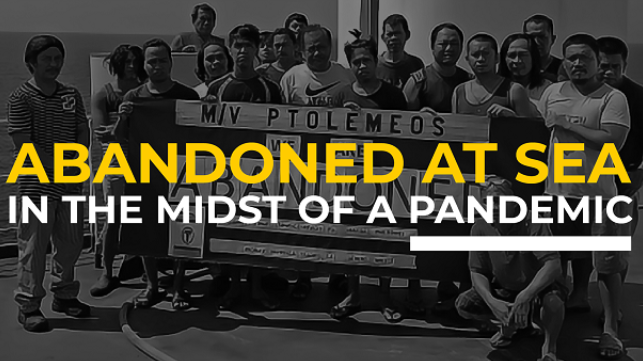 Twenty-five seafarers on two bulk carriers at anchor in the Port of Djibouti are among what the ITF calls a rising tide of crew abandoned around the world at the height of the Covid-19 pandemic.
The seafarers are stranded on the Liberia-flagged MV Ptolemeos and MV Arrybas.
“We have been on board eight months,” Arrybas Chief Engineer Dimitrios Siakas said via WhatsApp on April 18. “We be at anchorage without salary eight months, without going outside the harbor, without money.”
Siakas said there were still 11 crew on board on the ship, mostly from the Philippines. The majority of crew on the sister ship are from Sri Lanka.
On board the Ptolemeos, Dimitrios Falkos Second Engineer wrote on Facebook to a friend: “Hey man [it’s] 2.5 months [they] left us and we tried to leave,” he said. “I didn’t have a phone call for so long. May Saint Nicholas help all of you.”
That was December 4. Falkos has made no posting since, and there are concerns for his health. “Mr. Falkos should have undergone surgery in October 2019,” said Mohamed Arrachedi, ITF Arab World and Iran Network Coordinator. “He may not be receiving the medical care ashore as needed.”
Djibouti authorities are taking Athens-based Probulk Shipping and Trading to court over $10 million in debts to banks and suppliers, according to IHS Markit Safety at Sea. Both vessels have been forced to wait at anchor offshore.
“We always respect court process and national laws worldwide,” Arrachedi said. “But these seafarers have to go home. We want Djibouti authorities to collaborate with us. Djibouti is a signatory to the Maritime Labour Convention.
“The seafarers must also be given priority. It is inconceivable they have to wait so many months. It is time to find a solution. The Djibouti maritime authorities must honor their commitment to the MLC and end the abandonment of the seafarers stranded on the Ptolemeos and Arrybas.”
Abandonment provisions have been included in the Maritime Labour Convention since January 2017.
The ILO databank reports most of the Filipino crew were allowed to return home before Christmas and two Greek seafarers were repatriated in December and February.
The Ptolemeos first came to the attention of the ITF in August 2019 when the crew reported that they had not been paid for three months when the ship docked in Kenya. Kenyan Port State Control detained the vessel for MLC violations. An ITF inspector who visited the ship, reported that the Filipino crew was fearful of blacklisting if they complained. They had been forced to sign falsified pay slips saying they had been paid. The ITF secured the crew’s owed wages before the ship was allowed to sail. However, on arriving in Djibouti both ships were arrested.
The ITF responded to calls of assistance on behalf of the Greek crew on humanitarian grounds. In his first email correspondence to the Djibouti Port Authority, Arrachedi called for urgent assistance. “We have been informed that there is a legal course against the ship, which we do respect of course,” he wrote.  “But we also consider that the seafarers are already suffering abandonment in this case and cannot be the ones who pay for the situation that they have not provoked.”
The port authority did not respond.
In a second email dated November 15 addressed directly to Mohamed Abar at Djibouti Port Authority, Arrachedi wrote: “The ITF is very worried [about] the situation of abandonment [for] many months now.” He said the ITF was following this breach of the seafarers’ right to be repatriated and paid for their work. “As you know, the chief engineer has been hospitalized, and declared unfit. The others do suffer a very severe psychological and mental depression, and they have expressed many times their will and desire to be repatriated.”
He said the Greek Government had informed the port authority a relief crew were ready to join the ships. The absence of a reply or any collaboration was worrying, he said.
“The ships have not been allowed to go into the port, and the seafarers, or at least the Greek seafarers who have requested it repeatedly, have seen all their requests ignored.”
Arrachedi called for the ship to be allowed alongside to assure that the crew can attempt to sustain a more normal life. The crew should not be forced to stay on the vessel until the court process is finalized, which may take months or years, he stressed.
The ITF letters were followed by correspondence from the International Labour Organisation (ILO) that the Ptolemeos chief engineer was repatriated on February 29.
“Strenuous efforts have been made to see all the crew repatriated and paid their last four months’ wages, but this has unfortunately met with resistance from the local administrative authorities,” representatives from West P&I Club said in a statement.
The Greek Government is trying to reach an agreement with the Djibouti authorities but “I’ve received absolutely no answer,” Yiannis Plakiotakis, Greece’s shipping minister told Parliament on February 26.
“All this started before COVID-19,” said Arrachedi. “Now we have even more difficulties with repatriation. The seafarers are dispirited. There is no sign of a solution.”


Arrachedi said cases of crew abandonment were growing as nations locked down their borders during the global pandemic. “We’ve got lots of cases,” he said, listing 18 Syrian seafarers on board the Hannoud-O livestock carrier who have been abandoned in Lebanon for five months without pay, seven Egyptian seafarers onboard the Nader in Sudan with no food or drinking water and an Indian seafarer stranded in Tunisia unable to either join his ship or return home.
www.maritime-executive.com
Luke Smout Felixstowe
on April 23, 2020