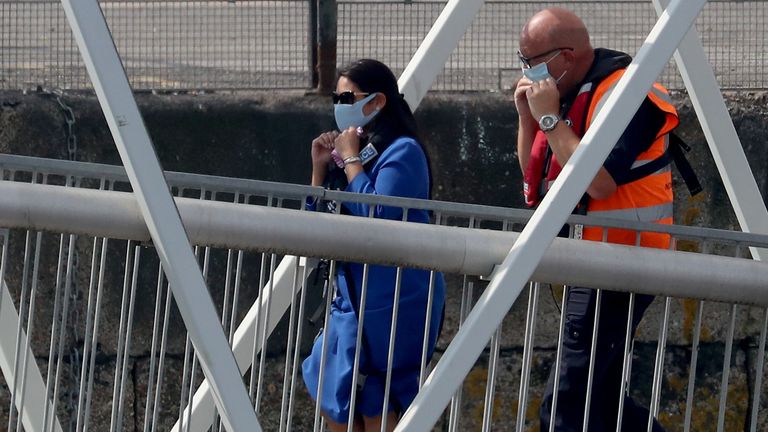 Boris Johnson said he wanted to work with France to stop the crossings and ensure that migrants "understand that this isn't a good idea, this is a very bad and stupid and dangerous and criminal thing to do".

"But then there's a second thing we've got to do and that is to look at the legal framework that we have that means that when people do get here, it is very, very difficult to then send them away again even though blatantly they've come here illegally," the PM added.

Downing Street has said that once the Brexit transition period comes to an end in December, the UK will be able to draw up a new framework.

The PM's official spokesman said: "We are currently bound by the Dublin Regulations for returns and they are inflexible and rigid - for example, there is a time limit placed on returns, it's something which can be abused by both migrants and their lawyers to frustrate the returns of those who have no right to be here.

"At the end of this year we will no longer be bound by the EU's laws so can negotiate our own returns agreement."

Immigration minister Chris Philp will head to Paris on Tuesday to hold talks with his French counterparts on the issue.

Asked whether the Royal Navy could get involved, the PM's spokesman said the Border Force was considering a range of options and the Home Office had been in talks with the Ministry of Defence.

The government has made an official request to the Royal Navy for help, while a former Royal Marine has been appointed "clandestine Channel threat commander".

The RAF has confirmed that its Atlas surveillance aircraft was supporting Border Force operations in the Channel on Monday.

The comments from the PM and Downing Street have caused anger among charities, who have criticised the use of "inflammatory language".

Lisa Doyle, the Refugee Council's director of advocacy, said: "It's incredibly disappointing to hear the prime minister using such inaccurate and inflammatory language to describe men, women and children who are desperate enough to make perilous journeys across the busiest shipping channel in the world.

"Seeking asylum is not a crime, and it is legitimate that people have to cross borders to do so."

Stephen Hale, chief executive of Refugee Action, said ministers should "move on from soundbites" and focus "constructively on serious and long-term solutions".

He added: "Britain is better than this. We have a proud history of welcoming people fleeing some of the most violent and oppressive regimes in the world and we can't stop now."

Early on Monday morning, a Border Force patrol boat met an inflatable dinghy carrying around 20 Syrian migrants off the coast of Dover.

Those on board were seen waving and smiling as the vessel made its way across the English Channel.

The migrants were met by the patrol boat Hunter shortly after 7am with the White Cliffs in sight.

Home Secretary Priti Patel was seen in Dover on Monday, disembarking from a police boat that had been out in the English Channel earlier in the morning.

A minister told Sky News earlier that the "unacceptable situation" of migrant crossings in the English Channel "absolutely needs to stop".

So far this year, more than 4,000 migrants have reached the UK by crossing the English Channel in small boats.

Almost 600 people made it to the UK in crossings between Thursday and Sunday.

Migrants being rescued by coastguards

UK calls for France to crack down on migrants

Speaking to Kay Burley @ Breakfast, care minister Helen Whately said: "We do have an unacceptable situation of many migrants coming across the Channel at the moment.

"It's also a dangerous route, there's real risk to life for those coming across, it's obviously a form of illegal immigration, it's not the right way to come to the United Kingdom.

"So, we are taking action."

Ms Whately added: "The important thing is we work together with the French to stop this flow of migrants.

"It's not a safe way for them to try and get here, it's incredibly dangerous, it also means money is going to people smugglers, so it absolutely needs to stop."

Last year, the home secretary promised that the crossings would have become an "infrequent phenomenon" by now.

She has since called the figures "appalling" and levelled blame at her counterparts on the continent as she revealed the UK and French governments were locked in a row over the interpretation of maritime law.