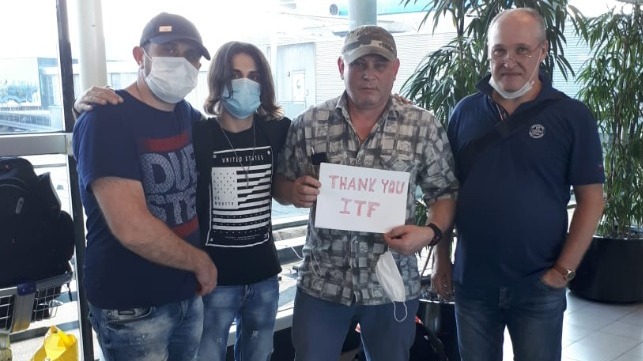 According to the International Transport Workers' Federation, the crew of the bulker Contamines recently resolved a crew change dilemma aboard their ship by refusing to work, forcing the vessel's ship manager to arrange for a relief crew.

In early July, the ITF learned that at least some of the crewmembers aboard the Contamines were working on expired contracts, and some had been aboard for nearly a year.

The Maritime Labour Convention gives seafarers the right to choose repatriation after their contract ends, or they may voluntarily extend their contract up to a maximum of 11 months.

Due to the coronavirus shutdown, travel and crew change have become unusually difficult, and hundreds of thousands of seafarers are working beyond their normal contract lengths worldwide, including some who are without a contract.

In early August, the Contamines was due to pass through the Panama Canal, and ITF saw an opportunity. Other seafarers have been able to repatriate via Panama, and ITF hoped to get the crew off when the vessel arrived, then return them to their families in Ukraine and Russia.

The ITF’s Latin America coordinator, Juan Villalón, reached out to the ship’s crew. He learned that their contracts had been doubled since they first signed, and many were over the MLC's legal maximum.

The crew also told him that the ship’s South Korean owner had promised on a number of occasions to repatriate them. The crew had been growing increasingly frustrated, and they said that some of their salaries were not being paid.

Villalón, who is based in Chile, contacted the ship’s manning agency and requested their side of the story. But after more than a week, there was no response. He sent a second warning and copied in the ITF inspector based in Panama, Luis Fruto. He also asked Fruto to alert the Panamanian Port State Control (PSC) authorities: the alleged MLC violations could be enough to get the ship detained, which could give the crew an opportunity to leave.

Preparing for a "strike"

The manning agency learned of ITF's plans to ask the Panamanian Maritime Authority to detain the ship, and it made contact and asked for ITF’s help to get the crew home. Fruto gave instructions for crew repatriation via Panama, but in the days that followed, the agency allegedly reversed course: there were no flights available out of Panama at the right time, it claimed. Instead, it said that it would do a crew change later at another port.

According to ITF, the flight information that the manning agency cited was false. “[The company] decided to act in the worst way possible. They blamed, they blustered. But worst of all - they were trying to keep these human beings as slaves aboard their property. I was disgusted,” said Villalón.

As a precautionary measure, Villalón asked the crew if they were willing to stop working if it should prove impossible to reach an agreement with the manning agency.

On July 24, the Contamines' crew told the ship's managers that they were going to stop working upon arrival to Panama. Within a few days, the company reacted and said they were working out flight options.

On July 31, the bulker arrived, and the Panamanian PSC and ITF Inspector Fruto were waiting for the vessel, along with an inspector from the ship's open-registry flag state. The flag state inspector pressured the crew to stay on board and wait until Bermuda, according to ITF, but the crew declined.

The next day, the Panamanian Maritime Authority arrested the ship until crew repatriation could be accomplished.

Within 10 days, the manning agency arranged for a relief crew and repatriated all of the outgoing crewmembers. The Contamines then transited the canal and sailed onward to her destination in Canada, with three labor-related deficiencies added to her PSC inspection record.

“The crew point blank said they will not accept this. They will not take any more lies from the company and its friends,” said Fruto. “This is an important example to other seafarers – if you stand up for yourself, we will stand with you.”

ITF reports that thousands of seafarers have been contacting their union and asking about how they can get off their vessel, and many are refusing to renew their contracts. However, ITF says that its inspectors can only help when seafarers actively ask for repatriation - something that many are afraid to do out of fear of retaliation or loss of future employment.