Types of Main Bearings of Marine Engines and their Properties 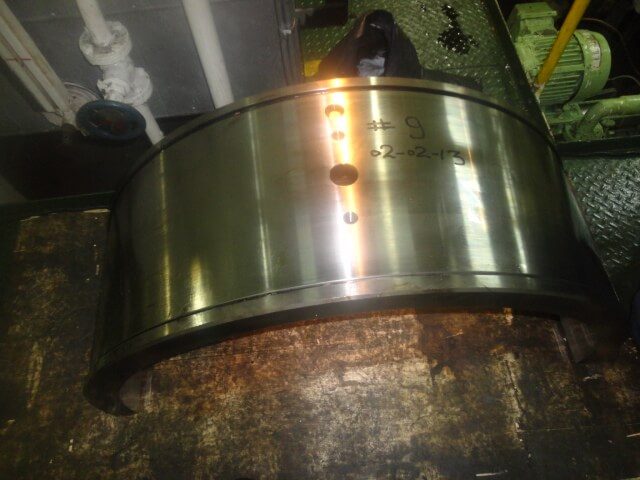 The rotational power of a ship’s propeller is determined by the power produced by the marine engine to rotate the crankshaft.

The crankshaft of the main engine is supported and connected to the connecting rod via main Bearings whose main function is to transmit the load without any metal to metal contact.

This is achieved by choosing special materials for manufacturing main bearings which float the journal pin of the rotating crankshaft when lube oil is supplied to it.

A ship engine comprises of heavy rotational parts which exert different forces on various parts of the engine crankshaft. One of the significant load-bearing parts of the crankshaft system is the main bearings.

The bearings in a marine engine are subjected to multiple forces which include:

– Gas pressure generated inside the liner

– Friction between the crankshaft and bearing due to engine vibration

The main bearing is thus designed to tackle various forces along with supporting the crankshaft rotating at high speed. Hence, the material used in making the bearing is essential so that it can support the crankshaft journal and also adjust to minor surface irregularities.

The engine bearing cannot do the work alone. They need a compatible lubricating oil to bear the load and allow the rotation of crankshaft journal smoothly. The lubricating oil enables the bearing to withstand abrasive particles which create friction between journal and bearing.

For selecting the main bearing for a marine engine, it must have the following features:

It should have good running in and grinding-in ability

The bearing material should have an excellent compressive and tensile strength

Abrasion:  If the oil is not filtered and treated correctly and contains minute particles, which are common in engines burning heavy fuel oil, it may cause fine scratches on the bearing surface

Erosion: When the oil supply pressure is not appropriate, or there is a rapid and unusual journal movement, it will lead the stripping of the overlay layer of the bearing. These phenomena are more common in medium-speed engines.

Fatigue: When the engine load over the bearing is too high, it may lead to the removal of the bearing lining. The bearing surface loads cracked paving.

Wiping:  It is the process when the overlay layer removes due to high temperature. When the bearing is new, wiping is required to remove the initial layer, which helps in re-alignment of the bearing to the journal. However, too much metal wiping can lead to increase in clearances affecting the performance of the bearing

Spark Erosion: When the propeller is at rest, the stern tube, propeller shaft and bearings are in contact with each other. Similarly, main engine bearing and journal are in contact with each other, maintaining continuity of the circuit. When the ship is running, due to the rotation of the propeller and lubricating oil film the shaft becomes partially electrical insulated. It may also happen on the tail shaft using non-metallic bearing which acts as an insulation.

The propeller at the aft is a large area of exposed metal which attracts protective cathodic current which produces an arc while discharging from the lubricating film. This results in spark erosion of bearings, which can lead to a worse situation if lube oil is contaminated with seawater

Hence, the increase in the clearance between the bearing and the journal pin can be due to the above-listed factor as well as the following:

-If there is significant and prolong variation in the engine speed, e.g. over speeding of the engine

–If there is a change in the viscosity of the lubricant

-If the lubrication oil temperature is high

-If the lube oil used has a different load-bearing capacity than the recommended.

-There is a change in the engine ambient temperature.

Types of the main bearing

1. Lead Bronze Bearing: These bearings consist of the following layers

Flash layer: It is the topmost layer with a thickness of 0.035mm made up of tin and lead. It is used to protect the bearing from corrosion and dust when not in use. This layer flashes off when a bearing is running.

Nickle Barrier: It is the second layer made up of nickel with a thickness of 0.02mm. Its main function is to prevent corrosion and avoid diffusion of tin into bearing metal.

Lead Bronze: The third layer composed of lead bronze which has an excellent anti seizing property and is the principle component which acts as a bearing out of all layers.

Steel back: Steel back is the last and backing part of the bearing used for shape and support over which all the layers are bonded together.

Gudgeon Pin bearing in a 4 stroke engine is usually made of lead bronze bearing and also used for the main bearing for smaller engines.

2.  Bi-metal Bearing: This bearing consists of the following layers

Aluminium Tin: The first layer of bi-metal consists of Al and Sn with a thickness of 0.5 to 1.3mm and this is the main element of this type of bearing.

Bonding Layer: The bonding layer consists of aluminium and it is 0.1mm thick. The main function of the bonding layer is to obtain a good bond between the shell and the top layer.

Steel Back: The backing part used for shape and support.

3. Tri-Metal Bearing: These bearings are called tri-metal bearing because they consist of three main layers

Flash Layer: It is the top most layer with a thickness of 1 micron made up of tin and lead and used to protect the bearing from corrosion and dust when not in use. This layer flashes off when bearing is in Running in the period.

Overlay: The second layer made up of white metal (Tin Antimony Copper) which is the main component in this type of bearing. Its thickness is 20 microns.

Interlay: It is the third layer used as an anti-corrosive layer for overlay. It is of 5 microns thickness.

Lining: It is the lining layer between interlay and steel back with a thickness of 1 mm made up of lead and bronze.

Steel Back: The backing part used for shape and support.