Trouble at Port of Felixstowe leaves UK bookseller with no books 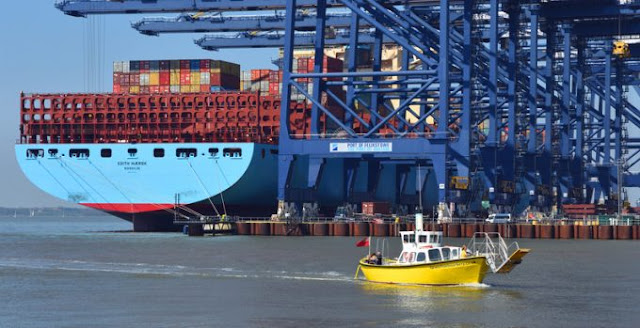 A UK book publisher says congestion at Felixstowe Port has left it with no books to sell in the lead up to Christmas.

Colin Hoad and Matt Green run a publishing company, Idesine, which has 4,000 books stuck on a ship that has been trying to dock since 31 October.

They are one of many businesses encountering problems importing goods.

"People are contacting us saying they've paid for books on pre-order as gifts, and we ultimately can't guarantee delivery," Mr Hoad said.

Delays at Felixstowe have been caused by a surge in import traffic as companies increased orders after the initial lockdown and some looked to stockpile goods before the end of the Brexit transition period.

The pandemic has made matters worse as large orders of PPE added to the backlog of containers on the quayside.

The port's owner, Hutchison UK, has said it is in the process of recruiting an additional 104 equipment drivers plus a number of engineers to help solve the problem.

But congestion at England's ports is now so bad, some shipping firms have limited the amount of cargo they will bring to the UK.

One of the world's biggest shipping lines, CMA CGM, told the BBC it was allocating less space on its fleet for UK imports for the time being.

"UK ports are currently experiencing yard and port congestion mostly in Felixstowe, and in London Gateway and Southampton to a lesser extent," said a spokeswoman for CMA CGM Group.

"We are controlling import volumes while maximising empty container evacuation wherever possible."

Empty containers waiting to be shipped back to Asia are causing traffic jams at ports across Europe and North America. That could have knock-on effects for companies' Christmas orders, said Peter Wilson, managing director of the UK freight forwarder Cory Brothers.

"We are already seeing that goods due by Christmas… are very unlikely to arrive because they're in their origin ports, waiting for containers," he said.

Causing even further headaches for importers, shipping companies have sharply increased freight prices in response to the congestion at UK ports - some by as much as 300%.

"What the lines are trying to do is to dissuade people sending stuff to the UK," said Alan Joseph, operations director of The Cotswold Company, which imports some of its wooden furniture from Asia.

This week, a freight company quoted a price of $8,000 to transport a 40ft container from Asia to the UK.

"At the end of September, market rates were less than a quarter of that, at $1,700 per unit," Mr Joseph said.

He added that while individual businesses will negotiate unique import costs based on the volume of goods they want to move, at the moment, prices are increasing across the board. And there are few alternatives for businesses whose goods are manufactured overseas.

"Airlines are not moving as much cargo because there are fewer passenger flights. The railway from China to Germany is now quoting rates in excess of $10,000 per container - which is not much of an option."

He said two other shipping firms are now refusing bookings for importing refrigerated containers to the UK.

"It's a worrying sign that big shipping lines are drastically reducing UK volumes because so much of the imports in the UK arrive through our ports, and if there's less coming there are less supplies of everything that gets imported."

Importing stock is also becoming increasingly difficult for Joe Burgwin, who is head of supply chain at the garden furniture firm Supremo Leisure, based in Telford. The business has been booming recently as the virus led to people spending more on their outdoor spaces.

Joe Burgwin says his freight costs have more than doubled.

"Now in negotiations with freight companies, prices have more than doubled and there are fears it could move even higher. We're predicting this to last until at least January, which makes business planning pretty challenging."

The ship carrying books belonging to publisher Idesine was originally supposed to dock at Felixstowe at the end of October, but the port was too busy so it was diverted to Europe.

Since Saturday, the ship has been moored outside Felixstowe waiting for a berthing slot.

After launching the company in June, Matt Green now has 2,500 pre-paid orders waiting to be delivered.

"It's incredibly frustrating that we can't get the book into our customers' hands," he said. "We just hope that we can do it before Christmas."

Congestion at Felixstowe Port could last into the new year

Shipping analysts say ports across the world are battling to manage the surging demand for imports, and Felixstowe has struggled to cope.

"At the moment, the port has become a bottleneck because other elements of the supply chain have got out of balance," said Eleanor Hadland, a ports analyst at the maritime consultancy Drewry.

She said getting a berthing slot at Felixstowe "is like trying to get a Tesco delivery in the beginning of lockdown".

"Partly that's because of Covid, partly Brexit preparation and a lot of external factors which have resulted in ports reporting congestion. But Felixstowe could have dealt better with these external challenges," she said.

Hutchison UK has warned congestion at Felixstowe Port could continue into the new year.